Join Professor John Camm and Dr Hugh Calkins for a discussion of the appropriate anticoagulation treatment plan in a patient with a long history of atrial fibrillation (and a previous cardioversion) who requires an ablation procedure. 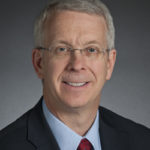 This case study of a 76-year-old man, filmed at ACC 2018, opens with the revelation that he is solely treated with aspirin for his long-standing atrial fibrillation. Professor Camm and Dr Calkins explore the initiation of more appropriate anticoagulation, including the importance of considering non-vitamin K oral anticoagulant (NOAC) therapy in a patient who will undergo left atrial ablation, and the appropriate timing of initiation. They also discuss the results of the RE-CIRCUIT trial, where dabigatran was compared with uninterrupted warfarin, and consider the implications of the results in this case and on clinical practice in general.